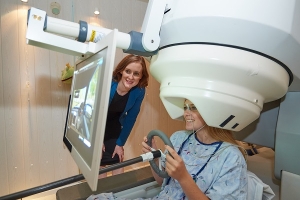 Elizabeth A. Walshe, PhD conducts neuroscience of driving research with a teen participant

Researchers are learning that ongoing development of the brain and cognitive function during adolescence may impact the ability of young drivers to attend to the road and drive safely. However, to date we know very little about the neural components of driving. Everyday driving is a complex behavior that requires integrated brain function across sensory, motor and cognitive systems.This allows the driver to control the vehicle, have good situational awareness, manage distractions, and make quick decisions and respond rapidly in critical moments to avoid crashing.

The field of neuroscience has traditionally relied on the use of simplified tasks of isolated brain functions, such as pressing a button in response to a visual or auditory cue (or both) following a pre-established rule, but these tasks do not capture the brain’s ability to handle complex real-world tasks like driving that rely on the integration of information from multiple systems in the brain (visual, motor and cognitive systems)

To bridge basic neuroscience with applied driving research at the clinical and broader population level, the Teen Driving Safety Research team at CIRP recently established the Neuroscience of Driving Research Program in partnership with the Annenberg Public Policy Center at the University of Pennsylvania and the neuroradiology Magnetoencephalography (MEG) Imaging Center at Children's Hospital of Philadelphia. The long-term goal of the Neuroscience of Driving Program is to identify the neural mechanisms underlying driver errors so that novel interventions can be developed to improve driver safety. In addition, this program aims to develop simulated driving as a probe of complex integrated brain function. This would allow us to use driving (a complex, highly relevant and high-risk task) to investigate typical and atypical neural and cognitive development in adolescents.

Motor vehicle crashes remain a leading cause of injury and death in adolescents, with teen drivers three times more likely to be in a fatal crash when compared to adults. One potential contributing risk factor is the ongoing development of executive functioning with maturation of the frontal lobe through adolescence and into early adulthood. Atypical development resulting in poor or impaired executive functioning, as in Attention-Deficit/Hyperactivity Disorder, has been associated with risky driving and crash outcomes. However, executive function broadly encompasses a number of capacities and domains, including working memory, inhibition and set-shifting.

In this scientific review of the literature for measuring executive control and driving outcomes, the researchers highlight which specific abilities are most important to safe driving as adolescents continue to mature.Given the key role that executive function plays in safe driving, this review points also points to an urgent need for systematic research to inform development of more effective training and interventions for young drivers.

This study published in JAMA Network Open is the first longitudinal study of working memory development in relation to vehicle crashes. Working memory -- a frontal lobe process associated with complex, moment-to-moment tasks essential to driving -- develops through adolescence and into the 20s.The researchers examined data from 118 youth in Philadelphia who were part of a larger groups that participated in a six-wave survey from when they were 10- to 12-year-olds in 2005 to when they were 18-to 20-year-olds in 2013-14. The survey measured working memory development, as well as associated risk-related traits and behaviors.The group later participated in a follow-up survey on driving experience.

Results suggest that a relatively slower rate of working memory development is associated with young driver crashes.The study authors believe that routine assessment of working memory across adolescence may help to identify at-risk teen drivers and opportunities for providing adaptive interventions, such as driving aids or training, that can help to address limitations in working memory-related skills that are critical to safe driving.

Read a press release about the research.