The Developing Brain and Teen Driving 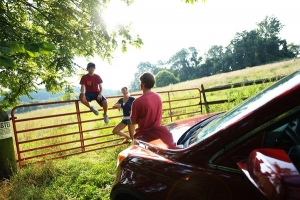 To prepare teens to be safe drivers, go to TeenDriverSource.org for free evidence-based tools, resources, and information.

I recently led a summary of research with colleagues from the Center for Injury Research and Prevention at CHOP and the Annenberg Public Policy Center at Penn that will help to inform future research and training in the area of executive function in adolescents and its impact on driving.

The overwhelming majority (75 percent) of serious teen driver crashes are due to "critical errors," with the three common errors accounting for nearly half of these crashes: lack of scanning that is needed to detect and respond to hazards, going too fast for road conditions, and being distracted by something inside or outside of the vehicle. Making matters worse: The majority of newly licensed teen drivers exit the learner’s permit period with significant skill deficits, leading to a much higher risk of crashing compared with more experienced drivers. The most common types of crashes involve left turns, rear-end events, and running off the road. While some of these errors may be due to a lack of driving experience, they may also be related to the ongoing development of the frontal lobe of the brain during adolescence.

The frontal lobe is associated with a set of higher-level cognitive processes called “executive functions” that give individuals the ability to make decisions, monitor and control their behavior and to manage complex tasks, such as driving. Three of these executive functions are crucial to safe driving:

To find out which of these specific abilities are most important to safe driving as adolescents continue to mature, we conducted a review of previous studies that investigated executive function abilities and negative driving outcomes in adolescents. Here’s what we learned:

Given the key role that executive control plays in safe driving, there’s an urgent need for more research to inform effective training and interventions that deal specifically with limited executive function capacities in order to reduce related common driver errors, and ultimately crashes involving adolescents behind the wheel. Here are some evidence-informed ideas to consider:

Read a blog about a study that explores the role of working memory development in teens and motor vehicle crash risk.