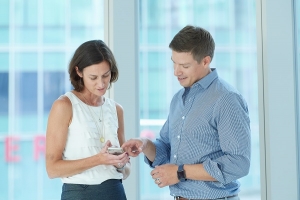 Cell phones and passengers are a major source of inattention to the roadway and are a contributing factor in motor vehicle crashes involving teens behind the wheel. Engaging in handheld cell phone use increases the risk of a crash substantially, and distracted driving research is much needed to prevent crashes involving young drivers. Investigators at the University of Pennsylvania and the Center for Injury Research and Prevention are working together to develop behavior change interventions that include strategies to encourage focused attention on driving.

These studies are testing different interventions aimed at reducing distracted driving, particularly in teen drivers, including a web-based educational intervention and behavioral economics strategies, as well as different ways to implement technological solutions, such as automated blocking of cell phone use and silencing of notifications while the vehicle is in motion. Outcomes for these studies are measured either through use of a driving simulator and/or a smartphone application and paired in-vehicle device.

Implementation of Technology That Limits Handheld Cell Phone Use While Driving

Novel smartphone applications exist that can limit handheld cell phone use while the vehicle is in motion by locking the phone screen, silencing notifications, and sending automated responses to incoming text messages. These applications work by detecting when the vehicle is traveling over a certain speed threshold. In some cases, hands-free use of navigation and music apps may be permitted if programmed at the beginning of the drive or while stopped. We are testing different ways to implement this technology to sustainably reduce cell phone use distraction in the long run. Ongoing pilot studies of distracted driving research include:

Attitudes on Technological, Social, and Behavioral Economic Strategies to Reduce Cell Phone Use While Driving in Teens

Feasibility Testing of an Intervention to Reduce Teen Driver Inattention

This program of research uses a web-based intervention based on the Theory of Planned Behavior that aims to reduce distracted driving and teen driver inattention to the roadway. Researchers developed the intervention from elicitation and survey data from previous work and empirical evidence in the literature. The results of this formative research on cell phones and peer passengers were published in Traffic Injury Prevention, the Journal of Pediatric Nursing, and the Journal of School Nursing. They then pilot tested the intervention using driving simulation to test the effects of the intervention on cell phone use, passenger engagement, and driving performance.

Read a blog post  and listen to a podcast about the research behind the creation of this web-based intervention.

Novel Smartphone-Based Measures of Adolescent Cell Phone Use While Driving

This study, published in Health Education and Behavior, examined novel measures of cell phone use while driving to better understand how and at what speeds adolescents use their cell phones while driving. The researchers enrolled a small group of adolescent drivers who were licensed for less than 90 days to install a device in their vehicle and an application on their smartphone to see if the study team could measure interaction with the cell phone. The researchers were able to collect data on how often the young drivers “unlocked” their cell phone, their trip length in miles and hours, and vehicle speed. Results showed engagement at high speeds, which is particularly risky for newly licensed drivers. The information gathered about how adolescent drivers engage with their phones at elevated speeds will help inform future research on the nature of risky driving behaviors and how to prevent them.

This study, funded by the Federal Highway Administration, will investigate behavioral economics strategies to reduce cell phone use behind the wheel. Behavioral economics combines insights and findings from psychology and economics to explain, and try to correct, counter-productive or predictably irrational decision-making. These strategies have been found to be successful in helping people change difficult health behaviors, such as smoking and not taking medications as prescribed.

The study team hopes to develop interventions that can be delivered through smartphones to discourage cell phone use while driving, a dangerous distraction. The researchers will investigate strategies that can be deployed in usage-based insurance (UBI) programs using data collected by Progressive Insurance based on an app developed by TrueMotion, a smartphone telematics platform.

Read a press release about the study grant.