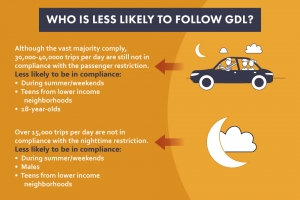 Graduated Driver Licensing (GDL) programs -- which include limitations on passengers and nighttime driving restrictions during the first year of licensure -- are a cornerstone of public policy aimed at reducing the burden of crashes on adolescent health. Further reductions in teen crash rates will rely on strengthening specific provisions of GDL, as well as greater compliance with and enforcement of GDL provisions during the intermediate license phase. Our program of research on GDL compliance and enforcement during the intermediate license phase is led by Allison E. Curry, PhD, MPH and focuses on providing evidence to inform improvements to GDL policy.

In a study published in the American Journal of Preventive Medicine, CIRP researchers reported the first population-level estimate of compliance with GDL among young drivers with an intermediate license. Using a novel application of the quasi-induced exposure technique, a method that has been developed to estimate driving exposure in the absence of more detailed information, the researchers determined rates of compliance with two GDL provisions—passenger limits and nighttime driving. This unique approach complements other current methods like naturalistic studies and paves the way for accurately measuring and improving GDL compliance and enforcement in the future.

For this study, the research team linked New Jersey’s licensing and crash record databases (July 2010 through June 2012), looking at data from 32,203 drivers and 30,594 crashes. They then focused on non-responsible crash-involved intermediate drivers to determine rates of compliance with two GDL provisions—passenger limits and nighttime driving.

View an infographic about the research.