Driver's License and Crash Patterns in NJ for Young Drivers

Previous nationally representative surveys have described important reasons why young drivers delay getting a drivers license but have been unable to estimate population-level licensure rates and trends. In a series of three research projects, Allison E. Curry, PhD, MPH and her team looked at driver's license and crash patterns in New Jersey for young drivers. Findings indicate that age and experience matter when it comes to young driver crash rates and support extending age requirements for the intermediate phase of Graduated Driver Licensing (GDL) to 21 years. 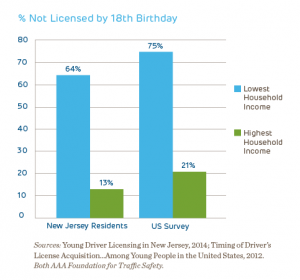 Using the New Jersey Motor Vehicle Commission's Licensing and Registration Database, researchers analyzed population-based rates of licensure among youth ages 17 to 20 years (n=255,833) overall and by key socioeconomic factors. This analysis also looked at trends in licensure from 2006 to 2011.

In NJ, the rates and timing of licensure have remained stable since 2006 despite changes to the state's GDL provisions and the economic recession, indicating that this is not a recession-driven trend. Also stable is the median age of licensure among those licensed by age 21: 17 years 1 month. From 2006 to 2011, 8,257 to 8,653 17- to 20-year-olds were issued driver licenses each year. 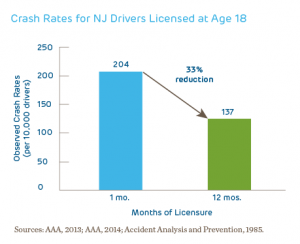 A second report examined the independent and joint contributions of age at licensure, driving experience, and GDL license phase on 24-month crash rates among the population of NJ drivers who were first licensed from age 17 through age 20. Crash rates by age of licensure, driving experience (based on time since licensure) and GDL licensure phase were calculated to determine crash risk. The results indicate that in NJ, age and experience matter when it comes to young driver crash rates.

A third report evaluated whether there is epidemiological evidence to support -- from a crash risk perspective -- adoption of passenger and nighttime restrictions for older novice drivers (ages 21 and older). Researchers utilized the New Jersey Safety and Health Outcomes (NJ-SHO) Data Warehouse to select all NJ drivers who were licensed between 2006 and 2014 and then grouped them on their age when licensed: 17; 18 to 20; 21 to 24; and 25 or older to study overall crash rates, as well as early and late night crashes and multiple passenger crashes.