Today, the Violence Prevention Initiative (VPI) is proud to support National Gun Violence Awareness Day. Our team is wearing orange to honor victims of gun violence and contribute to this important dialogue about curbing these preventable deaths. The day is sponsored by Everytown for Gun Safety, an organization that brings together grassroots organizations around topics related to gun safety. 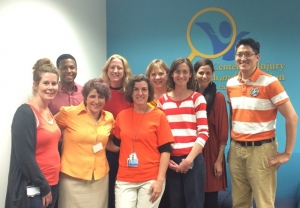 VPI is committed to providing awareness and education about topics related to gun violence and gun safety, particularly as it relates to children and families. Unfortunately, the statistics don’t lie—American children are at high risk for exposure to gun violence. According to 2014 research published in Academic Pediatrics, approximately eight children die of gunfire daily in the US. Among children and youth aged 1-24 years, guns cause two times as many deaths as cancer, five times as many as heart disease, and 20 times as many as infections. At CHOP alone, we have treated more than 250 cases of gunshot injuries to children ages 18 years and younger since 2003.

Homicides, suicides and unintentional deaths due to guns cut across racial, socio-economic and geographic lines. CHOP research published in Pediatrics in 2010 analyzed eight years of pediatric (ages 0-19 years) firearm deaths using US vital statistics data. The findings revealed that firearm mortality rates in predominantly rural counties were virtually identical to those in predominantly urban counties. While rural areas see more suicides and unintentional gun-related deaths, urban areas suffer more gun-related homicides. Despite the locale, gun violence is an American problem that everyone has a stake in solving.

Like Everytown for Gun Safety, VPI and CHOP support all efforts to limit access to firearms by children, including use of gunlocks and safe storage techniques, Child Access Prevention (CAP) laws that hold parents responsible for the consequences of a child accessing and using a firearm, and improving the availability and quality of mental health services for both children and adults. You can read CHOP’s full position on gun violence here.

Addressing violence in our communities as a public health issue requires bold efforts from state and federal policymakers, who are positioned to prevent future tragedies with a combination of informed mental health and firearm policies. Please access the links below for resources and ways to take action to protect children against gun violence.

Gun Violence Facts and Stats from the Violence Prevention Initiative

Gun Safety from the American Academy of Pediatrics

Gun Safety for Children and Youth: University of Michigan