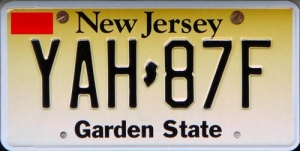 Allison E. Curry, PhD, MPH is leading the NJ GDL decals and vehicle identifiers research effort at CIRP, focusing on examining the effect of the provision on enforcement and crashes among young intermediate drivers. She and her team are also conducting research to better understand the mechanisms by which decals work to prevent crashes.

Although NJ has one of the most progressive GDL systems in the country, without this decal research the state would not have known empirically that its robust program reduces young driver crashes.

The second CHOP study, published in the American Journal of Preventive Medicine in 2015, provides valuable evidence that NJ’s GDL decal provision is associated with a sustained two-year decline in crash rates among intermediate teen drivers. Researchers compared monthly rates of police-reported crashes in the four years pre-decal and two years post-decal, reporting a 9.5 percent decline in the crash rate after the decal was implemented. Intermediate driver crash rates decreased 1.8 percent per year before the provision and 7.9 percent per year in the post-decal period. 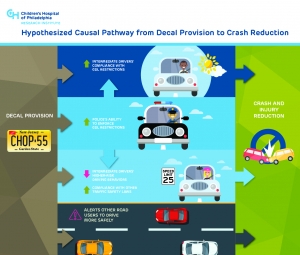 Download this infographic to learn about how GDL decals may work to reduce teen driver crashes.

The third CHOP study, published in the Journal of Adolescent Health in 2018, evaluated whether the decal provision was associated with an increase in compliance with passenger and nighttime restrictions. Although findings do not suggest that the decline in crash rates following implementation was due to increased compliance with nighttime or passenger restrictions, additional research is needed to understand mechanisms by which decal provisions may reduce young driver crashes.