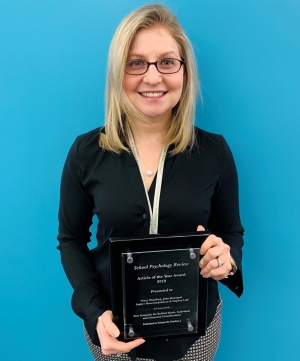 Bullying prevention researchers and those who work in school settings know the importance of positive bystanders in curbing bullying and helping to create a positive school climate. My colleagues and I were honored to be recently recognized with the 2019 Article of the Year award from the journal School Psychology Review for a study where we examined factors associated with sympathy for victims of bullying, as we know that sympathy is associated with increased likelihood of helping and intervening when bullying is witnessed.

Our participants were 1,051 third- through fifth-grade elementary students and 55 teachers from six elementary schools in a large urban school district, all participating in CHOP’s Friend to Friend (F2F) program. F2F is designed to reduce relational aggression (i.e., spreading rumors, using exclusion) among high risk girls, teaching them to recognize both physical and relational aggression, improve problem-solving skills, and promote prosocial strategies for dealing with peer conflicts. Prior research on the F2F intervention found decreases in relational aggression and increases in knowledge of social problem-solving skills, with findings maintained one year after the conclusion of the program. F2F has also been shown to have benefits for others beyond the relationally aggressive girls targeted in the intervention: CHOP researchers examined the broader effects of F2F and found a positive impact on boys and girls in the F2F classrooms who were not involved in the small-group intervention.

Are Kids Sympathetic to Bullied Peers?

These results can help inform anti-bullying programming in schools. Our findings suggest that programming that aims to increase positive youth bystander behavior should bolster student–teacher relationships, especially for relationally aggressive (and often socially influential) youth. The present results underscore the importance for schools to focus on establishing stronger emotional bonds between teachers and their students to establish a climate that is more sympathetic toward victimized youth. This can be accomplished by providing teachers with social and emotional professional development training or coaching – similar to what is provided to school counselors or guidance counselors – to help them gain the skills to both model and reinforce positive bystander behaviors, sympathy for victims, and prosocial peer relationships.

Read the study abstract.
Read more about the power of the bystander.
Read more anti-bullying strategies for teachers.