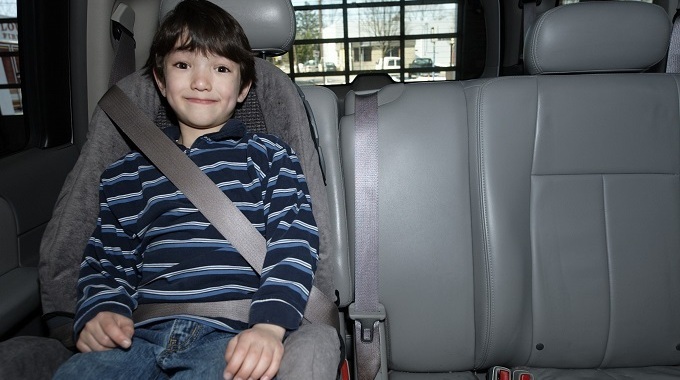 This week, I am excited to join colleagues from around the world at the Association for the Advancement of Automotive Medicine (AAAM) Annual Conference in Madrid, Spain, where I will be presenting CIRP’s work on the Motion and Muscle Activation of Young Volunteers in Evasive Vehicle Maneuvers line of research. This work, funded by the Toyota Collaborative Safety Research Center, examines responses of rear seat occupants, as young as age six through adults, to crash avoidance maneuvers on a test track.

Because prior research in this area has focused on seat belt-restrained occupants, our team wanted to investigate the kinematics, kinetics, and muscle responses of children restrained in belt-positioning boosters (BPB) during manual emergency braking (MEB), automatic emergency braking (AEB), and oscillatory swerving or slalom (SLA). In particular, we were interested in examining the contribution (if any) of motion of the BPB to the head and trunk movement of the child occupants.

With a professional driver on a test track, we tested seven healthy children ages 6 to 8 restrained in a low-back BPB. The MEB, AEB, and SLA maneuvers’ acceleration was based on previous literature and then tested for repeatability by the professional driver.

In all maneuvers, booster-seated children showed a different strategy in muscle activation compared to previous data on older age groups; video analysis showed that the children tended to hold onto the booster armrests and engage their upper extremities and upper torsos, in contrast to previous work demonstrating that adolescents and adults attempt to control their movement through activation of neck muscles.

In terms of BPB movement, in AEB and MEB maneuvers, the BPB contributed minimally to the overall forward motion of the children (BPB represented 11 percent or less of the total occupant motion). However, during the lateral acceleration of SLA, the BPB moved laterally up to 5cm in some subjects, representing up to 44% of the head and torso motion. This suggests that in this maneuver, the motion of the BPB may have contributed more substantially to the overall kinematics.

While more investigation is needed, depending on the crash circumstances this type of movement could be the difference between a BPB-restrained child passenger suffering a minor injury, such as a bruise, versus a serious head impact. Access the study here.

Our previously published research found that head and torso movements for rear seat occupants are greater in MEB than AEB, despite increased muscle activity in MEB. These findings suggest that the shape of the acceleration pulse impacts passenger kinematics; the AEB pulse was gradual and lower in magnitude compared to that of MEB, while the change in acceleration for MEB was more abrupt.

Speed reduction, however, is not the only variable that should be considered when determining the optimal AEB pulse; other characteristics that may impact a passenger’s kinematics such as how braking is achieved, how long it takes, and the smoothness of the pulse also need to be taken into consideration.

I am looking forward to building on this work through a project funded by the Center for Child Injury Prevention Studies (CChIPS), which aims to categorize AEB pulses and inform the development of AEB systems and standards that consider not only the efficacy of the automatic braking, but also the way the braking is achieved for occupants’ safety, particularly for children.

Further research into AEB is timely, as 20 vehicle manufacturers have committed to making AEB a standard feature on cars and trucks starting September 1, 2022.

Read more about the Motion and Muscle Activation of Young Volunteers in Evasive Vehicle Maneuvers project.