What Are the Long-Term Effects of Separating Immigrant Children from Their Parents? 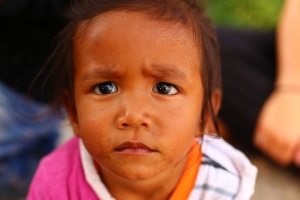 In the debate over the U.S. policy of separating detained immigrant children from their parents at the Mexican border, pediatric health care providers warn that the trauma will have long-term effects on the families, especially the children.

I recently talked with two of my colleagues at Children’s Hospital of Philadelphia (CHOP) about the physical and mental impact such an experience can have on children and how parents and other caregivers can help them heal. Dr. Mary Fabio, director of the Refugee Health Program at CHOP, and Dr. Nancy Kassam-Adams, co-director of CHOP’s Center for Pediatric Traumatic Stress and the associate director of Behavioral Research at the Center for Injury Research at CIRP, offered insights about the challenges traumatized families face upon being reunited.

The stress of being separated from their parents and surrounded by strangers in a strange place takes a physical and mental toll on children, and can even change their “brain architecture,” said Dr. Fabio. In fact, “it’s really hard to separate the mental and physical health aspects.”

For younger children, the trauma of being separated for their parents can result in attachment issues and lead to long-term emotional and cognitive problems, Dr. Fabio said. Children who are separated from their parents at an older age often experience problems in school and may exhibit regressive behavior. Older children may develop anxiety, depression or behavioral problems. Some may even self-harm in order to cope, she added.

“Detention is a very stressful experience for children even when they are allowed to remain with their parents,” said Dr. Fabio. “Detention is not good in general.”

Fabio pointed out that in 2017 the American Academy of Pediatrics (AAP) stated its opposition to the conditions in which immigrant children are detained by the U.S.

More specifically, in June the AAP issued a statement in support of the ending of the forced separation of immigrant children from their parents. “The [AAP] agrees with ending this abhorrent practice, which drew widespread outcry among pediatricians, advocates, and the American public. Families should remain together,” the organization said. “As pediatricians, we know children fare best in community settings, under the direct care of parents who love them.”

But for those children who have already endured separation from their parent—or continue to be—the road ahead will be a difficult one.

“Even when kids are reunited with their parents, complicating matters is that the parents may have been traumatized as well by their own experiences,” said Dr. Kassam-Adams.

To help children deal with the effects of the separation, parents and/or other caregivers should help them understand what happened to their family and reassure them that the experience wasn’t their fault, Dr. Kassam-Adams advised.

Also important is finding ways to create routines and do things together as a family, like eating meals or playing games the child enjoys, Dr. Kassam-Adams said. Family-bonding time may include things the family did together in the past or new activities to help reestablish a feeling of normalcy, she added

Children recovering from traumatic separation from their parents may be withdrawn, angry or even act aggressively towards parents and caregivers. When the adults in their lives understand where that behavior is coming from, said Kassam-Adams, they can respond with empathy even as they help the child gain control of problematic behaviors. The National Child Traumatic Stress Network has provided guidance and tips for caregivers in English and in Spanish.

She points out that, unfortunately, because the separation of families is a “human-created trauma”, it may take some time for children to regain trust in the adults around them.