One Autistic Young Adult's Road to a Driver's License

Moderator's Note:  For today's post, we highlight a recent newsletter from the Center for Autism Research (CAR) at Children's Hospital of Philadelphia (CHOP) that focuses on transportation and community participation for autistic adolescents and young adults. I frequently receive questions about this topic from families, and this newsletter is a fantastic resource to share with them. Below we share an excerpt from one of the articles on driving readiness from the newsletter about one family's experience with making the decision to drive and their autistic young adult's journey to getting licensed. Click here to read the full article. 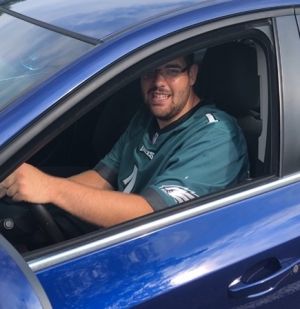 Ben's message to other autistic adolescents, teens, and young adults who want to drive: "Never
give up and keep on trying."

By the time Ben was a junior in high school, he’d seen his two older brothers get their driver’s licenses and drive to school for their last year of high school, and he set the same goal for himself.

Ben’s dad was supportive of Ben’s learning to drive, but his mom, Sandy admits that it took her a little longer to get on board. “I was pretty sure he could handle the technical aspects of driving, but worried about the problem solving required and dealing with the other drivers on the road,” she says.

So, as a family, they consulted Ben’s developmental pediatrician about his readiness to drive. Their doctor was willing to sign the forms required in the state of Pennsylvania for teens to obtain a permit, on the condition that he be evaluated by an independent driving instructor. “The driving instructor recommended that he work on getting better control of his ADHD before we proceeded, so we spoke with his doctor and adjusted his medications,” explains Sandy.

Ben applied for his learner's permit and started studying the driver’s manual in anticipation of taking the computer test. He took advantage of cell phone apps that let him take practice tests, and took the practice test “many, many times.” Once he started to receive passing scores, Ben felt ready to take the official test and headed to the DMV.  PennDOT gives test-takers the option of using headphones so that the questions can be read out loud. For Ben, this accommodation helped him to be sure he heard the question correctly.

“He returned from the DMV with the saddest face we had ever seen on him,” recounts his mom. “He had failed and felt the full weight of the failure and was ready to give up.” His family encouraged him to keep trying. After going back to the DMV six more times, Ben finally passed on the 7th try. “He was so excited that he yelled loudly and was reprimanded by the DMV workers!”

With the hard-won learner’s permit in hand, the real work began. On weekends, Ben and his dad, Glenn, headed to an empty industrial park to start learning. The family also obtained driver training hours for Ben through PA's Office of Vocational Rehabilitation. Those sessions took him out on regular roads.

With support from his parents and driving instructor, Ben spent two years getting ready to drive and take his test. “We renewed his permit as needed but did not want to renew the permit a third time, because he would have to take the written test again,” explained Sandy. So, they had a deadline.

When the day came for Ben to take his test, Ben passed on his first try. "We had never seen him so happy about an accomplishment,” says his mom. “He had worked so hard and persevered for so long.”

Ben’s message to others who want to drive: “Never give up and keep on trying.”

Click here to access the February 2020 CAR Newsletter that includes information about a new CHOP study on independence and mobility among autistic teens and about transportation alternatives for non-drivers.