The NFL is Helping CHOP Keep Kids Safe From Concussion

CIRP's concussion research is the focus of a Children's Hospital Research Institute Breakthrough Report article.The article is abridged here and can be read in its entirety from the link below. 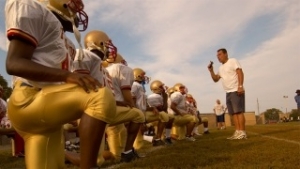 What do 300-pound National Football League players have in common with kids in youth sports? Plenty, when it comes to wanting to prevent head injury.

Kristy Arbogast, PhD, co-scientific director of the Center for Injury Research and Prevention at Children’s Hospital of Philadelphia, is also an engineering consultant to the NFL Players Association and part of the NFL’s effort aiming to reduce head injuries.

“What we’ll learn at the pro level — thanks to all of the NFL’s resources — will trickle down to kids,” Arbogast says. “The advances in material science and design will create a path to improved protective equipment for kids.”

What resources is she talking about? In 2016, the NFL pledged to spend $100 million to support independent medical research and engineering advancements to make the game safer. In fall 2016, the league earmarked $60 million of that for what it calls the Engineering Roadmap, a program designed to better understand the biomechanics of head injuries in pro football and create incentives to improve protective equipment, including helmets.

Arbogast’s work with the NFL focuses on two areas: annual helmet testing to determine which ones provide the most protection and creating advanced sensors to track the severity of impacts to the head.

The goal for testing football helmets is to provide NFL players with scientific information to help them choose ones that offer the most protection. During the 2018 season, for the first time, the NFL and NFLPA prohibited players from wearing 10 low-performing helmet models. This means more than 200 players will move to helmets that have been shown to be better performers.

Arbogast and Eagles wide receiver Mack Hollins starred in an NFL Films video, shot at the team’s practice facility, that explain the changes to players around the league. The video is posted on the NFL website, PlaySmartPlaySafe.com.

Read more in the full Breakthrough Report article about a prototype instrumented mouthguard that measures the motion and acceleration the head experiences during play that will help design improved helmets that are position-specific and about Minds Matter's novel research to improve diagnosis and treatment for concussion in youths.