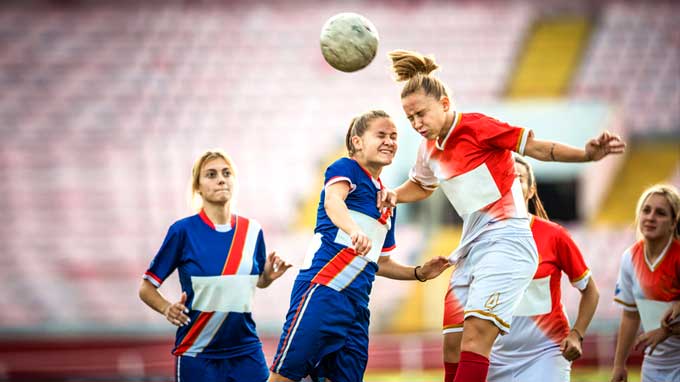 With the 2018 Olympics underway, we recently learned of three female Olympic athletes – two ice hockey players and a bobsledder– who have pledged to donate their brains to concussion research.

This news helps draw attention to a knowledge gap around how concussions occur and resolve in female athletes and if there is a risk of long-term poor health outcomes. Of course, it’s our hope that these ladies have successful, healthy experiences in South Korea and go on to live very long happy lives.

In the meantime, I thought I would briefly sum up what scientists know about concussions in female athletes today and what we urgently still need to learn.

This is particularly important as the landscape of women’s athletics changes – more participation overall and increased participation at elite levels of play. We need to learn if a female’s concussion looks different – in its symptoms, physiology, and recovery – than that of their male counterparts. If so, attention needs to be directed to the development of evidence-based prevention strategies and objective diagnostics and treatments that are specific to concussion in female athletes.

The Differences We Know About

When we look at sports with similar rules, such as men versus women’s soccer or baseball versus softball, females have higher rates of concussion. According to health insurance-driven data, many more sports concussions are being counted among females than before.  Although concussions are still more common among young males, diagnosis rates for young females increased 118% between 2010 and 2015 from 6.1 to 13.3 diagnoses per 1,000 members, compared to an increase for young males of 48% from 11.5 to 17.0 diagnoses per 1,000 members.

There are many reasons hypothesized why this is the case, and there is some interesting ongoing research that attempts to tease out this answer. One potential reason is behavioral. For instance, women and girls may feel less is at stake in reporting their symptoms or maybe they are more attuned to their bodies than their male counterparts.

There are also real physiological factors: We know females have weaker neck strength, which could result in less control of the head movement that occurs during an impact and result in increased accelerations.

Important hormonal differences might affect the brain’s response to an impact or injury; there is conflicting evidence whether hormones like estrogen that are increased in females are protective or increase the risk of injury. Regardless, the fluctuation of hormonal levels throughout a female’s menstrual cycle likely influences concussion risk.

Similarly, there are divergent views in the literature whether females experience (and report) more symptoms than males post-concussion. Data has shown that females may report different types of symptoms than males. Clinical experience at CHOP has shown that female athletes may take longer to seek care, perhaps because their sports typically do not have the same athletic trainer coverage as men’s sports. This delayed healthcare utilization may factor in longer recovery times.

Importantly, most of this research has been conducted on collegiate or high school athletes, and we do not know if these observations extend to non-athletes and those younger than high school age.

What We Need to Find Out

According to the Institute of Medicine report on Concussion in Youth, there is inadequate data to comprehensively define the head kinematics young athletes experience across sport and sex. There has been a research focus on male-dominated sports such as football and ice hockey. This is changing due, in part, to a recent National Institute of Health requirement to include sex differences in medical research. So these gaps in research are starting to close.

Here is what we need to find out:

With grants from the National Institute of Neurological Diseases and Stroke and Pennsylvania Department of Health, we are collecting data among middle school and high school lacrosse, soccer, and basketball athletes (male and female) to quantify the effects of concussive and sub-concussive biomechanical head impact exposure on neurologic function.

Enrolled athletes 1) undergo pre- and post-season evaluation of clinical and neurofunctional metrics to identify changes in outcomes; and 2) wear head impact sensors during play to quantify the number and magnitude of head impacts. Changes in pre- to post-season clinical and neuro-functional outcomes will be related to biomechanical metrics measured through the sensors (e.g. number and magnitude of head impacts).  We hypothesize that biomechanical load exposure – as defined as the number of head impacts, maximum acceleration or rotational velocity, and cumulative load across a season – will vary by sex, age, and sport.

Because we are studying both sexes in the same exact way across similar sports, we are providing standardized research methods and assessments regardless of sex. Thus, we should be able to note differences between the sexes in biomechanical load exposure, recovery profiles, and objective measures of concussion such as balance and pupillometry.

At the end of this five-year study, we hope to provide the field with prevention and intervention strategies that are relevant for both males and females.