Moderator’s Note: This post was authored by Aditya Belwadi, PhD, former Research Scientist II for biomechanics research at the Center for Injury Research and Prevention and Principal Investigator for many projects funded through the Center for Child Injury Prevention Studies (CChIPS). As of December 2019, Dr. Belwadi has left CHOP to pursue his career elsewhere.

A few weeks ago, National Safety Council (NSC) announced an update to its child passenger safety (CPS) policy statement. In addition to reinforcing long-standing CPS best practices—which are consistent with those last affirmed by the American Academy of Pediatrics in 2015—NSC also included calls-to-action around particular issues that caught my attention. One is a mandate that children under 2 years of age should be properly secured in their own seat on airplanes using a CRS that has been approved and tested for aircraft usage. 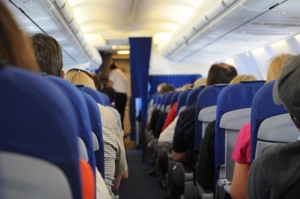 While not all CRSs are approved for use on airplanes, some CRS manufacturers utilize a simple inverted crash test with an anthropomorphic test device (ATD), or crash test dummy. These restraints will have a label reading "This restraint is certified for use in motor vehicles and aircraft" printed on it.

For older children, the FAA recommends the use of a harness-type restraint called the CARES device, which is tested specifically for use on airplanes for kids from 22 to 44 pounds and up to 40 inches tall.

While child health and safety advocates such as the American Academy of Pediatrics and the National Transportation Safety Board support a mandate that children under age 2 should be restrained in a CRS in their own aircraft seat, there is another side to this issue. If parents/caregivers are forced to choose between purchasing another plane ticket for an infant (and being required to carry a CRS onto an aircraft), they may elect to drive to their destination instead, statistically raising the family’s risk of injuries or fatalities.

Further research, perhaps in the form of focus groups with parents, is needed to better understand potential barriers and any unintended consequences that may come with a CRS mandate for children under age 2. Additional research is also needed to explore the injury metrics for children of different ages and sizes in CRS, simulating aircraft-type crashes and turbulence motion. In the meantime, parents and caregivers should follow the FAA’s recommendation that all children who fly are restrained in their own aircraft seat using an appropriate CRS. You can read more about the FAA’s recommendations for CPS on airplanes here: http://www.faa.gov/passengers/fly_children/

Next week, I will discuss another recommendation from NSC that calls for 3-point seat belts on school buses.