Health care providers can act to provide guidance about gun safety and safe storage of guns and ammunition. Click here to learn more about counseling on gun safety in the home.

The mission of pediatric medicine is centered on a simple objective: nurturing healthy children, and giving them every chance to become healthy adults. In every patient encounter, we introduce an opportunity to take steps toward this goal.

Today, June 21st, is ASK Day, when parents, caregivers and pediatricians alike are called upon to remember that, when it comes to guns in the home, Asking Saves Kids. One third of homes with children are also homes with guns. Of greater concern is the 1.7 million children who live in homes with guns that are improperly stored, loaded, and unlocked. Research tells us that access matters. In 2015, there were 2,824 firearm-related deaths among children less than 19 years of age. Eighty-nine percent of unintentional firearm deaths occur at home, and those with a gun in the home are three times more likely to die from firearm-related accidents. A new report published in Pediatrics just this week provides additional analysis of the devastating impact of guns on children in the US.

Many parents underestimate how much children know about firearms in the home. One study showed that 75 percent of first and second graders knew where the guns in their homes were stored and 36 percent admitted to handling them, in direct contrast to their parents’ perceptions. And being small is unfortunately no barrier to tragic outcomes; children as young as 3 years of age may have the strength to pull a trigger. Gun owners and non-owners who live in the same home may have different levels of knowledge about how the guns in the home are stored, which speaks to the importance of educating all members of the household. For more facts and statistics on youth gun violence maintained by CHOP’s Center for Violence Prevention, click here.

Asking families about guns falls in line with much of what we do in the practice of medicine. When we ask about guns, car seats, and smoke detectors, we and the families we serve identify barriers to reaching our goal – the safety of all children – and work together to eliminate them. Prevention makes a measurable difference. For example, studies have shown that just the combination of child-proof safety locks and loading indicators can reduce the risk of accidental death by nearly a third. Additionally, states with active Child Access Prevention (CAP) laws have lower rates of unintentional death by firearm.

Asking is framed around a simple question: “Is there an unlocked gun where your kids play?” This establishes the foundation for discussing guns not only in the home of the patient, but also in the homes of their friends and relatives. The desire for safety where children play is the common ground on which we can build our conversation. The hope is that in asking this one life-saving question, we empower families to do the same.

Tools to Help Start the Conversation

Watch a webinar hosted by CHOP’s Center for Violence Prevention that provides information and practical strategies to address gun safety in the home for those in a position to counsel families. 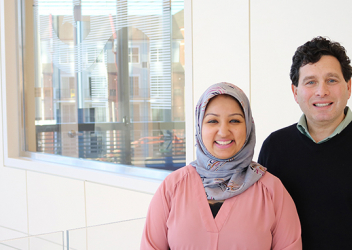 Educating on Firearm Safety in the Emergency Department