Preventing Aggression in Schools Everyday (PRAISE) is a 20 session classroom-based problem-solving and aggression/bullying prevention program designed for 3rd to 5th grade students. PRAISE was designed to be implemented in the classroom setting for all students to reduce aggressive behavior. This bullying prevention program is a universal adaptation of the CHOP-developed Friend to Friend program, which specifically targets relationally aggressive 3rd to 5th grade girls in small pull-out groups.

Several steps were taken to appropriately modify F2F for the classroom-wide PRAISE program, including:

The Community We Serve

Towards a Replicable Model

PRAISE is a classroom-based aggression and bullying prevention program for 3rd to 5th grade students that aims to:

Over 10 weeks and 20 sessions, the program teaches students prevention strategies for bullying, such as identifying feelings, recognizing signs of physiological arousal that can lead to aggressive behavior, using strategies to stay calm, interpreting others’ intentions accurately, developing stronger empathy and perspective-taking skills, and understanding the steps one can take to be a positive bystander.

PRAISE uses detective analogies to teach social cognitive strategies for paying better attention to one’s own arousal signs, others’ behavior, and the social environment. These strategies are depicted and practiced through teaching modalities such as culturally-specific cartoons, videos, and role plays. 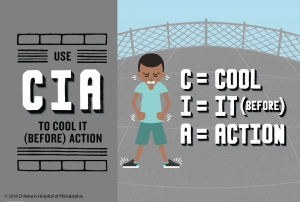 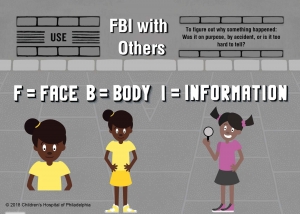 Examples of detective strategies as depicted through cartoons. At left: CIA – A strategy used to encourage youth to stay calm instead of quickly reacting; At right: FBI – A strategy employed to notice others’ Face and Body, and Information in the environment, to determine intent.

The Community We Serve

With support from Pew Charitable Trusts, PRAISE is being conducted with 800 3rd to 5th grade youth and 26 teachers in three urban schools within West/Southwest Philadelphia from 2016-2019.

PRAISE is designed to prevent aggressive behavior among 3rd to 5th grade students within the urban school context. PRAISE and F2F were developed in partnership with African-American girls who attend schools in urban environments and their teachers, parents, and community members to be scientifically grounded, developmentally appropriate, and culturally relatable for African-American elementary school students.

An initial trial of PRAISE funded by NIH revealed that PRAISE increased knowledge of problem-solving skills and decreased aggression, especially in girls (Leff et al., 2010).  Based on these strong results, the research team was awarded two dissemination grants from the Pew Charitable Trusts (2013-2016, 2016-2019).  In the first two years of each award, PRAISE was run by facilitators from CHOP in partnership with classroom teachers, and strong results were found overall for participating students, as well as for students identified as aggressive.  Specifically, during years one and two of the first Pew award, 73% of participating students improved by 20% on at least two of the outcomes (e.g., physical aggression, relational aggression, problem-solving skills). In addition, 76.5% of aggressors improved at least 20% on two or more outcomes. During years one and two of the second Pew award, 69.4% of all participating students, and 72.9% of the students identified as aggressive improved by at least 20% on two or more outcomes.

Towards a Replicable Model

In the last year of each Pew award, the implementation of PRAISE shifts from being run by CHOP to being run by school staff with training and coaching from the CHOP team.  This model is intended to build school capacity for implementing and sustaining needed prevention programs, and to maximize the number of schools and students that can receive the program.  Initial results suggest that school-led PRAISE with consultation from CHOP leads to significant improvements in students’ knowledge and behaviors, similar to when the program is CHOP-led.  These promising findings will inform our future application of the coaching model for PRAISE in order to ensure successful implementation, impact, and long-term sustainability of the program.