All types of bullying continue to be a problem in US schools and beyond, but it's important to remember that all bullying is not physical or verbal (e.g. teasing, threatening). Relational (or social) aggression includes non-physical behaviors that damage a youth’s status or social standing within a peer group. Relationally aggressive behaviors include gossip, social exclusion, starting or spreading a rumor behind someone’s back, giving the silent treatment, or threatening to stop being friends with someone if they don’t act a certain way. Often cyberbullying (bullying behavior that occurs through the use of electronic means) takes the form of relationally aggressive behaviors where the technology is the medium through which the victim’s social status and/or relationships are harmed. 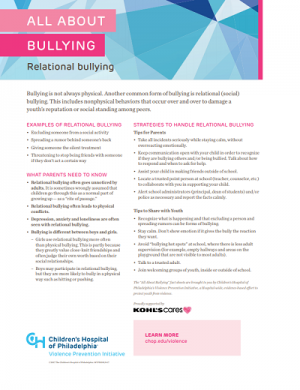 While relational aggressors are often disliked by peers, a good portion of these bullies are socially influential and popular. They may use their relational aggression as a way to achieve higher status in the peer group (e.g., by starting a rumor about a peer in order to protect their own status in the peer group). Relationally aggressive behaviors more quickly lead to physical conflicts among urban youth in under-resourced schools.

Girls are more likely to use relational aggression as compared to physical aggression. They are more likely than boys to find the behavior emotionally taxing because they have, and greatly value, close-knit friendships. In addition, girls sometimes assess their own worth based on their social relationships, whereas boys may measure their worth based on other things, such as athleticism, as well as social relationships. Despite this, relational aggression is not just a girls’ problem, as it also occurs frequently among boys.

There are steps that parents, educators, and youth themselves can take to combat relational aggression. Read more in this CHOP fact sheet.