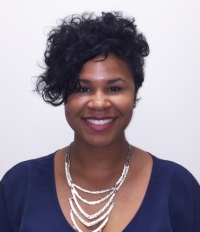 India Azzinaro, BSW is the Medical Advocacy Supervisor at Lutheran Settlement House (LSH) and Children's Hospital of Philadelphia (CHOP). India’s advocacy on behalf of survivors of Intimate Partner Violence (IPV) began early on as a counseling intern with the Bilingual Domestic Violence Program at LSH, until she was hired as the Intimate Partner Violence Specialist with LSH in 2011.

In her time with LSH, India has been instrumental in overseeing the implementation of the Medical Advocacy Program at Albert Einstein Medical Center and CHOP primary care clinics. In this role, she created (and maintains) a cross-departmental task force to assess and improve the CHOP Outpatient IPV policies and the institutional response to patient families with Protection from Abuse Orders. India has created screening and referral protocols and trains hospital staff on their use. As LSH’s Medical Advocacy Supervisor, India provides supervision to Medical Advocates, participates in hospital task force and administration meetings, regularly visits LSH's off-site hospital programs including CHOP, St. Christopher's Hospital, Albert Einstein Medical Center and Aria Frankford Hospital, and supports Medical Advocacy staff in tabling events and trainings as needed, along with other related duties.

India has presented throughout Philadelphia and Pennsylvania to medical and educational institutions on the intersection of IPV and healthcare. India has also presented at the National Organization for Victim Assistance Conference in 2014, the International Summit on Violence, Abuse, and Trauma in 2015 and the National Center for Victims of Crime in 2016. India is a passionate advocate of positive parenting education and intervention via One Kind Word. India is an experienced facilitator of Dr. Jemmott’s Be Proud Be Responsible: Pregnancy Prevention Intervention curriculum. She currently serves as a Fellow for the Violence Prevention Initiative at CHOP.

India received her Bachelor’s Degree in Social Work from Eastern University. After a promotion to Senior Medical Advocate and Counseling Liaison, she now holds the title of Medical Advocacy Supervisor (as of July 2016). India can be contacted at azzinaroi@email.chop.edu.