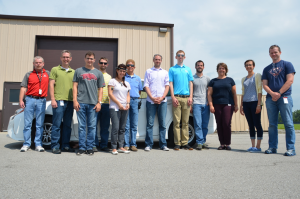 Emergency braking has been established as the most common pre-crash evasive maneuver conducted in crash and near-crash scenarios across all age groups. In examining kinematic and muscle activity differences between AEB and MEB scenarios for rear-seated adult and child occupants, for all ages, head and torso movements were greater in MEB than AEB, despite increased muscle activity in MEB. Occupant motion could be reduced if AEB systems could use more gradual deceleration profiles that still stop the vehicle within a reasonable distance when compared to sudden maximum emergency braking applied by a human driver.

Previous research has primarily investigated the effect of pre-crash maneuvers on seat belt-restrained children, teens, and adults. Through the Motion and Muscle Activation of Young Volunteers project, the kinematics and muscle responses of booster-seated child occupants during pre-crash maneuvers (AEB, MEB, and SLA) were quantified and booster movement during these events was characterized. Children had greater head and torso movements in MEB compared to AEB. However, the booster seats did not move substantially during those braking maneuvers. During the SLA pre-crash maneuvers, however, the booster seat moved laterally for several participants, contributing to significant head and torso movements. During these maneuvers, the children demonstrated a greater use of their biceps, deltoids, abdominal, and middle trapezii muscles. This provides important data on the transition between pre-crash and crash phases and helps identify interventions integrating active and passive safety.

Pre-crash maneuvers generated by lateral vehicle acceleration, such as the oscillatory movement of evasive swerving or sustained lateral accelerations, simulating lateral vehicle skidding, have been studied in less detail than events generated by emergency braking. Therefore, the Motion and Muscle Activation of Young Volunteers projects also investigated a constant radius turn that generated sustained lateral accelerations on seat belt-restrained vehicle occupants that may precede either a planar or rollover crash. Child occupants demonstrated reduced lateral torso movements, greater neck muscle activity, and bracing compared to adults. This suggests that children may brace more than adults to control their upper body motion which may have implications for injury likelihood in the event of a subsequent crash.

Following these studies, current research funded by the Center for Child Injury Prevention Studies (CChIPS) aims to compare and characterize AEB pulses across different vehicles, with a goal of optimizing vehicle restraint and seat design to provide protection in common real-world scenarios.