While it is well established that teen driving is a significant public health concern, as teen drivers have a fatal crash risk three times that of adults, we also know that fatal crashes do not tell the whole story. Prior research has shown that nearly a third of all crashes, particularly those where no one is injured, are not reported to police. Therefore, the incidence of teen crashes may be even greater than previously thought.

Our CIRP team, led by Dr. Helen Loeb and me, is examining this issue in a novel way: using the Strategic Highway Research Program 2 (SHPR2) Naturalistic Driving Study to compare crash rates between teen drivers ages 16 to 19 and experienced adult drivers ages 35 to 54. The SHRP2 database contains extensive data on real-world driving and offers a unique opportunity to develop crash rates inclusive of all crashes, not only those reported to police, while providing an exact quantification of the miles driven.

In our first study in this line of research, funded by the Center for Child Injury Prevention Studies (CChIPS) and published in Traffic Injury Prevention, we found that novice teens crashed with greater severity, at higher speeds, and more often than experienced adult drivers, with a crash rate more than twice what was previously reported in the fatal crash literature. This disparity was heightened when focusing on the most common crash scenario, rear-end crashes. 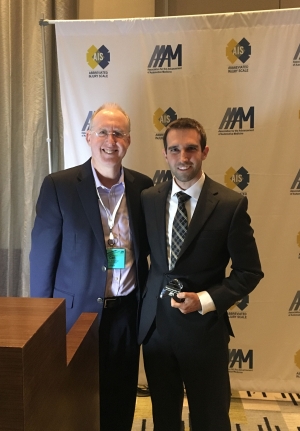 On behalf of my co-authors and colleagues at CIRP, I was honored to recently receive the 2016 Best Scientific Paper Award at the Association for the Advancement of Automotive Medicine (AAAM) 2017 Annual Meeting for this work. On a personal level, I was privileged to receive an award that many of my colleagues and mentors have previously received. It is also an honor to know that our work advancing teen driver safety is valued so highly by AAAM and the traffic safety community.

At the AAAM Annual Meeting, we also presented the next phase of our work analyzing near-crashes using the SHRP2 database, representing the first study to use a large-scale US naturalistic driving dataset to present data on teen and adult near-crashes, as well as how near-crashes compare to crashes. Our research team plans to continue using the SHRP2 database to understand differences in teen driving behavior across different sociodemographic populations. Ultimately, the goal is that this research will lead to improved novice driver training programs as well as customized active safety systems in vehicles that are tailored to the unique driving styles of teens.

Read more about this line of research on the CChIPS website.