A note from Carol Murray, MSS, MLSP, CIRP@CHOP training manager: Today we are pleased to welcome a guest blog post from Todd Hullfish, a Mechanical Engineering and Biomechanics student at Drexel University in Philadelphia who is in the midst of his second co-op research training experience at CIRP@CHOP.
During the course of two co-op experiences at CIRP@CHOP, I have been performing the tasks of a Biomechanical Research Engineer and exploring the potential applications of Finite Element Modeling (FEM) under the supervision and mentorship of Dr. Aditya Belwadi. On my first day, Dr. Belwadi told me it was time to learn FEM. Now eight months into my second co-op project, I have gained a better understanding of this fickle beast and will share with you the basics of FEM and how I have applied it in research. 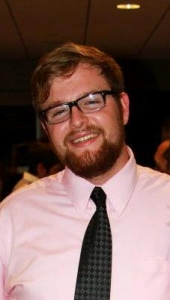 What is Finite Element Modeling?

In its simplest form, FEM is a method of computation that represents complex geometry with simple shapes, such as triangles and squares in what is referred to as a ‘mesh’. Each corner of a shape or intersection of lines in the ‘mesh’ is referred to as an integration point and can be used by a computer program to understand the shape in question as a mathematical array as opposed to the abstract shape as we perceive it.

By breaking down complex shapes into much smaller, more manageable components, we’re able to analyze systems that would otherwise be too difficult to solve by other means. For instance, if we wanted to understand how the front of a car crumples and deforms when it’s involved in a head-on collision, there are several factors to consider before even starting to develop a solution, including the material of which the different parts are made, how that material is shaped, how the shape affects the behavior of the material, and a whole list of other factors. Instead, if we place all of this information into an FE model, we can break it down into more manageable pieces. For instance, the car becomes a mesh that is comprised of a bunch of shapes, and each of the shapes can be treated as its own individual problem. Thus, what was once a system too large to manage are now many simple problems that, when put together, will give us the solution to the problem as a whole.

I recently used FEM to look at injury causation scenarios for pediatric occupants of cars and how different methods of mitigation, such as air bags, affect them.  Last week I presented my research, sponsored by CChIPS, at the 10th Annual Injury Biomechanics Symposium at The Ohio State University. To give a brief summary of the project, we took a certain type of side-impact crash test that had a dummy seated in the rear seat of a car, converted it into a FE model, and then replicated the real world crash test through a lengthy and tedious process of trial and error, also known as validation. Validation is necessary when working with FE models to prove that what we’re telling the computer to do, and what the computer is doing, is realistic and accurate.

Once we validated the model, we were free to do all kinds of interesting experiments. We changed the seating position of our dummy to better replicate its position in a real- world crash, including slouching, leaning on the door, and other typical positions. We also were able to simulate the interaction between the dummy and an air bag if it were to deploy. FE gives us the freedom to change all sorts of factors that are too expensive or too time-consuming to do in a full-scale test. With FEM, we can run an experiment with a large number of parameters, and the only cost to the project is the time it takes to run the simulations.

As a third year Mechanical Engineering and Biomechanics major at Drexel University, I had experienced two prior co-ops. The first was with a medical device company developing insulin pumps, and the second was with CIRP’s Engineering team looking into the injury biomechanics of side-impact crashes. The CIRP experience has helped me want to focus on the human component of engineering-- more than the product development side— and that I want to continue to explore the infinite possibilities of FEM.