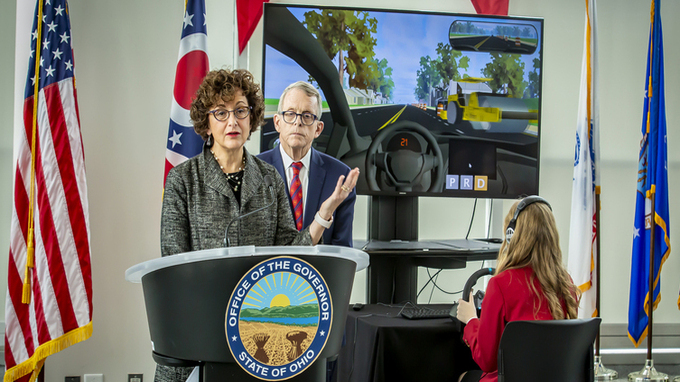 I was recently interviewed for a blog post about the virtual driving technology developed by CHOP that Ohio is using to assess new drivers' preparedness and critical driving skills. An abbreviated version of the blog post is included below. Click here to read the full blog post on the CHOP Research Institute’s Cornerstone blog.

During the past decade, CHOP researchers conducted the research that led to “Ohio - Ready, Test, Drive!” They developed and validated a laboratory-based driving assessment that safely exposes drivers to common serious crash scenarios and measures skill in avoiding crashes. Diagnostic Driving then developed this technology as a commercial-grade mobile virtual driving assessment system that does not require expensive fixed-based driving simulators.

Ready-Assess™ pinpoints what Dr. Winston calls the “peri-license period” for a novice driver. Much like the perinatal period surrounding birth (before, during, and after) is a time for careful preparation and monitoring to assure the start to a healthy life, the peri-license period surrounds the critical moment of licensure, making sure new drivers start a lifetime of safe driving. Receiving a license is “time zero,” Dr. Winston said – a highly teachable moment that injury research experts and public safety authorities can take advantage of.

So, what happens during time zero for licensure in Ohio? The workflow implemented by ODPS provides a good example for other states: Applicants scheduled for their on-road exam complete a self-directed virtual driving skills assessment spanning about 15 minutes. This comprises an orientation video, an “acclimation drive,” and a simulated driving route that incorporates common and serious crash scenarios. After a quick survey, the software provides each individual with automated feedback about their strengths and areas of improvement.

These critical skill areas are important to highlight because they are the same deficits and errors that research has found to underlie the most common serious crash scenarios in both young and adult drivers.

For example, in analyses using the National Motor Vehicle Causation Survey, CHOP researchers crunched the data and found in drivers 16 to 19 years old, five scenarios accounted for 37 percent of all serious young driver crashes. The contributing errors made immediately before serious crashes were identified as recognition errors (poor scanning, hazard detection, and distraction) and decision errors (following too closely, traveling too fast for road conditions).

Since Ready Assess™ has the power to assess a novice driver’s preparedness in these areas and provide them with customized feedback, the system has the potential to motivate that driver to practice more at an opportune moment. Given that about 95 percent of crashes are due to driver error, improving these skills has the potential to reduce incidences of serious crash scenarios.