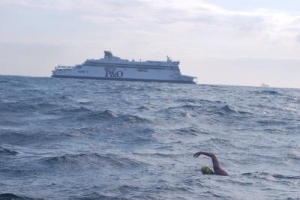 21 miles in 11 hours 28 minutes! That’s how long it took Ika Kovacikova to swim the English Channel in Mid-August to benefit CHOP’s Violence Intervention Program (VIP). As a 2012 alumna of CIRP’s Injury Science Research Experiences for Undergraduates (REU) program supported by the National Science Foundation, Ika knew VIP was a cause that would inspire her to complete the crossing. Ika raised $600 (and still counting!) as her way of giving back to CIRP@CHOP and VIP.

Confronting 60-degree Fahrenheit water temperature, jelly fish, high seas, and huge barges passing 50 yards in front of her, Ika powered her way from the shore of Dover, England to the beach of Calais, France. With her love of swimming and admiration for marathon swimmers, she was inspired by two Smith College students who completed the swim in 2012 and encouraged her to take the plunge. As you can imagine, this accomplishment was no small feat; on August 19th after training for over a year, the race was on!

The first 30 minutes took some adjustment, to put it mildly. The water was choppier than expected and she “spooned” her first jelly fish, believing it to be “the closest a human being has ever gotten to a jelly without being stung.” But after an hour into the swim, Ika got her sea legs. It wasn’t a ride in the park, though. To pass the time Ika started counting jellyfish and got up to 39. Amazingly she was stung “only” three times!

The greatest challenge, however, was making it through the final hours when she developed spasms and cramps in her legs and the weather turned. As Ika shared in her blog: “The last four hours were really truly tough. There is no other way to describe it. This was the only time I ever started to doubt being able to finish…The current picked up going one way, and the winds picked up going the other...At this point I was making very little forward progress, as the tide was pushing me sideways away from the shore rather than towards it. France was getting no closer!”

Yet Ika persevered with her mantra, "I am warm, I am strong, I am PATIENT, I can do this." While her support crew in an accompanying boat motored along next to her, she realized how rough the seas had become. “With one breath I saw the bottom of the boat as it tipped; with the next breath I saw the deck of the boat with the crew hanging on.”

Finally, just before darkness descended, she reached the shore of France, becoming one of the elite few in the world to traverse the infamous English Channel. Congratulations and thank you Ika! We knew you could do it.

Watch this short video about Ika's English Channel adventure and visit her blog to learn more about her journey and to donate to the CHOP VIP Program.